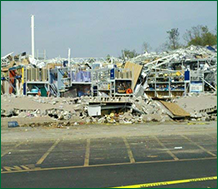 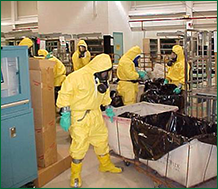 CCI provided labor and management resources to in response to a bioterrorist attack at two major United States Postal Service (USPS) mail processing facilities. The Hamilton USPS – a 300,000-square foot facility in Trenton, NJ – was a regional processing center supporting a large section of the northeast U.S. The Brentwood USPS – an 800,000-square foot facility in Washington, DC – supported mail collection and distribution for all of the Nation’s Capitol mail. CCI’s immediate objectives were to provide first response containment services and to deal with the continued influx and non-affected mail staged at these facilities. CCI’s response to both facilities occurred within a few hours of each other and CCI immediately dispatched 22 trained response personnel. Forty additional personnel were immediately requested to assist in securing and containing the threat and spread of contamination at both acilities.

Working through general contractor, CCI coordinated and executed the packaging and loading of existing mail for distribution to emergency processing centers established in both regions to continue handling incoming mail. As these activities were being completed, an additional 60 personnel were dispatched to both locations to begin processing mail staged outside the facility in large transfer trailers. Off-site decontamination was accomplished by the use of commercial irradiation technology employed in the sterilization industry and adapted to handle bulk mail at technology centers in New Jersey and Ohio. Mail was repackaged to specific standards that facilitated the irradiation process. As mail trailers were cleared, work began on processing mail within each
facility to the irradiation facilities. CCI mobilized an additional 50 personnel total to begin packaging mail from within this contaminated environment in both facilities. 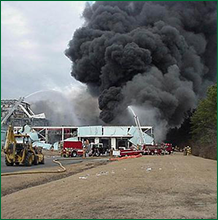 Contaminant Control, Inc. personnel responded in connection to the West Pharmaceutical Plant explosion in Kinston, North Carolina that occurred on January 29, 2003. Contaminant Control, Inc. was called to respond in two different capacities. The first was in an emergency response capacity, at which time Contaminant Control provided personnel and equipment for a variety of on-site tasks, involving personnel access and control (security and logging) for entry into the facility. Additional tasks involved containerizing and packaging of various wastes, such as drums, bagged and bulk materials, which were damaged by the fire and/or water from the firefighting effort. Contaminant Control provided 24 hour/7 day per week monitoring and collection of site drainage ditch water, which were sampled on a periodic basis by a West Pharmaceutical Environmental consultant. Contaminant Control used a series of pumps and a vacuum truck to transfer the water to 20,000 gallon Frac tanks and to the City of Kinston POTW.

In addition to the Emergency Phase of this event, Contaminant Control was hired to perform the decontamination and demolitions of the remaining facility. Contaminant Control provided decontamination, turnkey demolition and disposal of approximately 40,000 sqft. of the warehouse portion of the plant. Demolition was performed utilizing hydraulic shears and grapplers on hydraulic excavators. Materials store in the warehouse, as well as the structure itself were segregated and staged using heavy equipment.

The performance of the initial phase with this customer led to sole source project awards for St. Petersburg Florida and Omaha Nebraska. Both facilities were Hepa vacuumed and the wastes containerized to relieve the facility of the powders that resulted in the Kinston NC explosive environment.

CCI was one of the first companies to respond to the Deep Horizons BP oil spill in the Gulf of Mexico. Working with our strategic partners, CCI provided both labor and equipment to assist in the clean-up both on land and water. 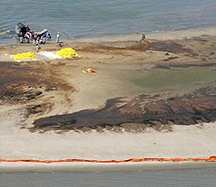 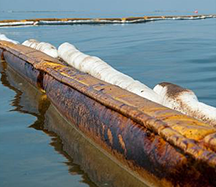 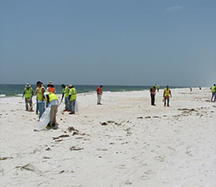 In Stage One, CCI sent in a small strike team to set up a temporary decontamination area, search through the buildings to locate major problem areas, and started general collection and staging of materials. The Team – comprised of a supervisor and three technicians – was on site within 48 hours of Notice to Proceed. The Team spent three days on site performing reconnaissance, site set-up, and high hazard removal in areas where chemical mixing was a threat. In Stage Two, CCI mobilized a larger crew and equipment to continue with material collection and removal. Debris and other materials were removed from the buildings using skid steer loaders with grapplers to gain access to chemicals. A mini excavator was used to render the debris materials unusable. Chemical-type materials were removed from the buildings by personnel using carts and buckets to a staging area. Another contractor at the staging area worked on packaging, transportation, and disposal. This crew included one supervisor, one safety officer, two foreman or lead technicians, three operator technicians, and at times had between six and eight technicians. All supplies for EPA Level C response were supplied along with necessary equipment to carry out the above tasks.